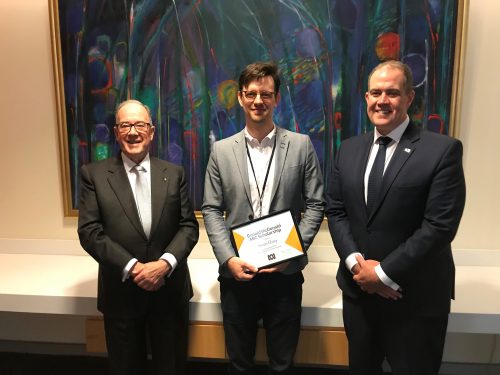 Australian Broadcasting Corporation Managing Director David Anderson has announced Simon Elvery as the winner of the 2020 Donald McDonald ABC Scholarship to the Reuters Institute for the Study of Journalism within the University of Oxford.

The Donald McDonald Scholarship provides an ABC journalist or program maker with the opportunity to produce a research project focused on the study of journalism. The recipient participates in a three-month fellowship program at the Reuters Institute.

Currently a Brisbane-based editorial developer with ABC News, Simon has worked at the ABC since 2013. His varied skill set in reporting, data analysis and programming has been instrumental in him producing a wide array of stories that examine the effect of technology on our everyday lives.

During his studies at the Reuters Institute Simon will undertake research to identify how technology can be used more effectively in the pursuit of investigative journalism.

ABC Managing Director David Anderson said, “In a time when commercial pressures are affecting the ability of media outlets to invest in investigative journalism, and this type of reporting has become more essential than ever, Simon’s research will be invaluable in identifying how technology can be further utilised to serve quality public interest journalism.”

About the Donald McDonald Scholarship:

Every year since 1999 the ABC has awarded a scholarship to an experienced high level journalist to join the Reuters Institute program, which brings together journalists from around the world for the purpose of providing them with opportunities to develop their skills further.

It was renamed in honour of Donald McDonald AC on the occasion of his retirement in 2006 in recognition of his commitment to excellence in journalism. As ABC Chairman, Mr McDonald was instrumental in the establishment of the scholarship and provided ongoing encouragement and support for the program and for the scholars throughout the program’s history. The recipient participates in a three-month fellowship program at the Reuters Institute at Green Templeton College in the University of Oxford.